Although Eugenio Foz’ paintings are essentially figurative, his inspiration came from such random and ephemeral forms as clouds in the sky or traces of moisture or grime on a wall. As a child, he recounted, he was fascinated by the designs left by the morning dew upon his wooden window sill in Barcelona. He claimed there was no difference between an abstract painting and a figurative one, that his women – or his landscapes or still lifes, for that matter – were nothing more or less than splashes of color upon a white surface.

Quite apart from every artistic current of his time, he passionately pursued a single quest all through his life – color. Some felt they could see how impressionism had influenced his work, but Foz denied this, explaining that impressionists sought to reproduce the effects of light whereas, for him, all that ever counted was color.

« The color of an object is unique,” he would say. “It never changes. Light is what changes, or the perception of those who see it… Take any one of my landscapes out into the noonday sun – you’ll be convinced it was painted in broad daylight. But then put it in the shade and you’ll think it was painted in evening. »

For Foz, the sky was the same blue as a package of Gauloises, the French cigarettes he smoked. Numerous experiments confirmed this observation. And skin tone was strangely similar to sand, just add a smidgen of blue.

When painting beaches, he would use the jars of sand he brought back from his travels, moistening it with a drop of water in order to reproduce the nuances.

The sea was the only thing that didn’t possess its own unique color. It was both clear and reflective. So the sea floor and the reflection had to be captured at the same time. Maybe that’s what explains the painter’s particular fascination with the sea – both the depth and the manner by which it seemed to connect colors, each to all the others. Here was the crossfade that would unite them, making them all hang together as one, with never a false note.

He liked to compare painting to music, colors to notes.

« The white of the canvas is my silence,” he would say. “Brush strokes are my notes. »

He would take an entire day to constitute his palette. Precise and minute doses went into the blending of his mixtures. At certain times during his life, he would use plastic spoons from toy tea sets to measure the paste he squeezed from his tubes of paint. Arranged from lightest to darkest on a thick wooden board with years of layers of oils spread and wiped into a single patina, in scales from red to yellow through the gamut of possible oranges, from blue to yellow, from black to white, etc.

His whole life was dedicated to the creation of an ideal palette. Once perfected, his brush would dance between it and the canvas and never risk the slightest dissonance.

His quest for color and harmony was something like a physicist searching for an equation that would explain the very cohesion of the world. The secret he chased was linked to no less than the progress of the universe. To his eyes, it all went hand-in-hand – color and music, music and physics, physics and life…

And that might explain the emotional power of even the least of his paintings. Nudes, seascapes, landscapes and allegories, every single canvas is infused with his vision – at once intense and modest, poetic and raw, passionate and shy.

His tender feelings for women, his love of the sea, the sense of humor that shines through certain compositions (The Whale or The Black Hole, for example), his nostalgia for his native Spain, from which he was exiled so young, all of these contribute to making his work, beyond his mastery of color, profoundly human and sincere.

Toward the end of his life, when his eyesight was failing him terribly and his mental faculties were in decline, he continued to paint. But because his physical resources were lacking, he had to give up on details and get right down to essentials. His last paintings look not so much like they were painted in a studio as at the bottom of the sea.

The place where emotion and color come together as one. 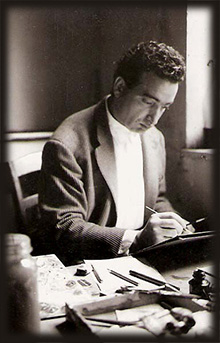 Eugenio Foz in his artist's studio

Eugenio Foz in his artist's studio 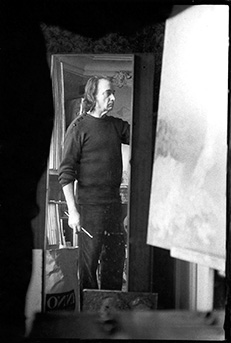